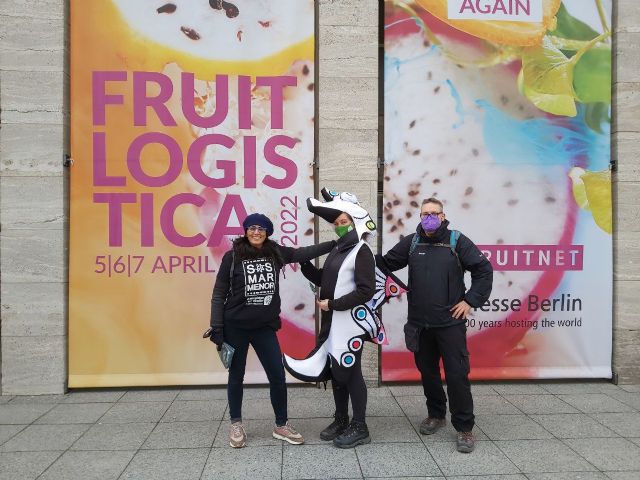 Ecologists in Action Murcia Region has the collaboration of the German entity Deutsche Umwelthilfe (DUH), an environmental and consumer protection NGO. DUH is part of the German representation at the European Environment Office (EEB).

More than 60% of the production of Campo de Cartagena is dedicated to export, being mainly vegetables (such as lettuce, peppers and broccoli) and fruits (such as lemons, melons and watermelons). 25% of exports from the Mar Menor area reach Germany, 21% to the United Kingdom, and 16% to France.

Ecologists in Action Murcia Region launched in April the international campaign “The true price of Mediterranean food” (in Germany called “Der wahre Preis der Billiggemüses”). This campaign puts its focus on the fresh fruits and vegetables that are grown in the Campo de Cartagena, and throughout its journey until it reaches the final recipients. The large German supermarket chains (Aldi, Edeka, Lidl, Rewe) are the main recipients of this production.

That same month, Ecologistas en Acción began its activities by visiting the Fruit Logística fair in Berlin, the largest fresh produce fair in Europe, where fruit and vegetable production and distribution companies from all continents meet annually. Visitors were informed and meetings were held with different actors, from related organizations to consumer groups, resulting in very fruitful collaboration agreements and dissemination of the proposals.

Since then, the campaign has been developing different actions to raise awareness among consumers, since they are a fundamental link for the necessary change in the agricultural model, currently unsustainable, that dominates the environment of the Mar Menor.

Among these actions, the twinning of the Mar Menor with L’Albufera de València and with the Doñana National Park, natural spaces with problems very similar to those of the lagoon, have made it possible to find parallels and have a broader approach to the problem. Educational and knowledge activities about the lagoon have also been carried out during the summer, together with the Diosa Maat sailboat, such as the interpretive kayak route around Isla del Ciervo.

The project now takes another step forward and launches a website. This online space has information related to the actions carried out within the framework of the project, compiling a guide to good practices in the different links of the food chain, in the Region and in the Campo de Cartagena, as well as in its final destination Germany.

It also includes a complete newspaper library of news about the Mar Menor, which allows searching by words contained in the title of the news or by date. It has active social networks Instagram, Facebook and Twitter, “Mar Menor Consumo” and through the hashtag @marmenorconsumo.

Through this portal, Ecologistas en Acción exposes news and actions related to the campaign, documentation of interest, experiences and good practices, both personal and from the citizen movement in defense of the Mar Menor, as well as from key sectors such as agriculture, the tourism or traditional fishing.

This campaign is expected to raise awareness about the reality of the food chain, from cultivation (production) to distribution and sale of fresh produce (export and consumption) in large German stores. And, with this, it is intended to advance in the essential change towards a more transparent and equitable food chain; In short, towards a healthier, fairer and more sustainable food model.

This article is originally published on murcia.com Next post Unleashing The Power Of The Perfect Storm