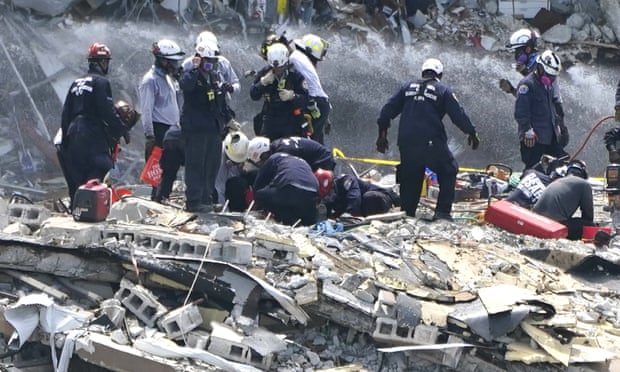 Officials in Florida insisted on Sunday there was still hope of finding survivors in the rubble of a collapsed oceanfront condominium building, as firefighters finally controlled a large blaze inside the wreckage that hampered three days of rescue efforts.

But the death toll rose to nine after the discovery of four more bodies in the ruins of the Champlain Towers South apartments, in the Miami suburb of Surfside.

The Miami-Dade mayor, Daniella Levine Cava, said the victims were brought out overnight, while more than 150 people remained unaccounted for.

“We were able to recover four additional bodies in the rubble, as well as additional human remains,” the mayor told reporters.

“As of today, one victim has passed away in the hospital and we’ve recovered eight more victims on site, so I am confirming today that the death toll is nine. We’ve identified four of the victims and notified the next of kin.

“My deepest condolences to the families, the friends, the communities of those who’ve lost their lives, and my prayers are with the families and the whole community as they mourn this tragic loss.”

Crews used cranes to remove large chunks of concrete from the site where the 12-storey block crashed down in the early hours of Thursday.

The cause of the catastrophe is not known, but it was revealed on Saturday that consultants flagged “major structural damage” to the 40-year-old tower in 2018 and recommended repairs that were not carried out.

The hunt for survivors reached its fourth day as international crews arrived. They included a team of engineers and search specialists from Israel, which would “make every effort to help save human life and offer support to the Jewish community and to our American friends”, Israeli defense minister Benny Gantz said, acknowledging Surfside’s sizable Jewish population.

Levine Cava welcomed their presence, and that of Mexican experts bolstering state and federal crews.

“We have the best, we have the right people and the right number, and we are getting it done as we continue to sweep these piles with our canines, with our cameras, with our sonar,” she said. “We’re continuing our efforts to find people alive.”

She added that the dousing of a fire that filled the disaster site with thick smoke through the early stages of the rescue operation, causing workers to evacuate, provided new hope.

“Saturday afternoon, and through the night on Sunday, there was clearer visibility,” she told CBS’ Face the Nation.

The Florida state fire marshal, Jimmy Patronis, told reporters Miami-Dade fire rescue carved a trench 120ft long and 20ft wide underneath the wreckage, which he said acted as a firebreak and allowed better access. Patronis also welcomed the easing of thunderstorms he said contributed to the shifting of some debris.

Miami-Dade police released the names of four victims. They included 54-year-old Stacey Fang, whose 15-year-old son was pulled alive from the rubble on Thursday.

Friends and families of the missing received updates at a hotel, many breaking down as they learned crews had found remains. There was an increasing sense of frustration at a perceived slow trickle of information.

Levine Cava said the relatives’ numbers had grown. Many of those unaccounted for come from south American countries. One Briton, 38-year-old Bhavna Patel, who is pregnant, is missing, with her husband and one-year-old daughter.

Among those waiting was Rachel Spiegel, whose mother, 66-year-old Judy Spiegel, lived on the sixth floor. She said: “We’re trying to hold it together. I know my mom is a fighter. I know she loves us. I know she doesn’t want to give up. So, you know, it’s day three, so it’s hard.”

Anxiety was growing among residents of the fallen tower block’s sister building, Champlain Towers North, which was built a year later in 1982, with apparently identical materials and specifications. Engineers conducted a basic survey of the building on Saturday.

“They didn’t find anything out of the ordinary,” said the mayor of Surfside, Charles Burkett.

“What we’re doing now is saving lives and bringing people out of the rubble. What we’re going to do in the next phase, after we address support for the families, is a very deep dive into why this building fell down.”

Burkett said he did not plan a mandatory evacuation but added that if he lived there: “I’d be gone.” 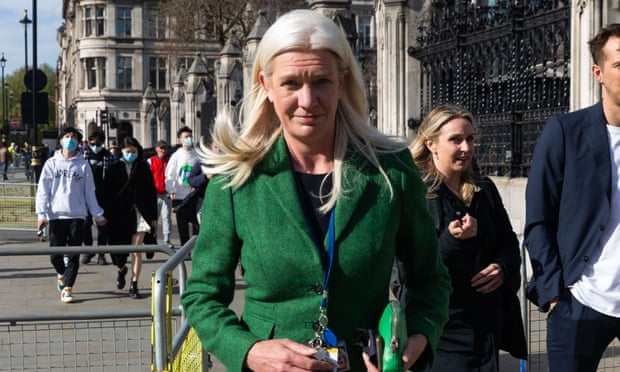