When the vaping industry and its allies launched a major push to dissuade U.S. President Donald Trump from banning flavored e-cigarettes this fall, they pointed to a newly identified demographic group: vaping voters.

Battleground state polling conducted for the industry by one of the presidents trusted campaign pollsters suggested a ban could tip the balance against the president — 96 percent of vapers said they would be less likely to vote for a candidate who wanted to ban flavored e-cigarettes.

Most serious public-opinion pollsters would scoff at the survey, which polled only the most committed vapers off a list provided by an industry group. And those numbers stand in contrast to a new POLITICO/Morning Consult poll — which found that a ban on flavored electronic cigarettes is broadly popular among the whole electorate.

Still, the industry-sponsored polling proved convincing enough to Trump, who is dogged by low job-approval ratings and wary of alienating even a tiny slice of the electorate that might otherwise be in his camp.

“This may be a constituency thats 5 or 6 or 7 percent of the American adult public,” said Paul Blair, the director of strategic initiatives at Americans for Tax Reform, a conservative interest group that has long fought for lower taxes and fewer regulations on electronic cigarettes. “But in states like Michigan, that matters.”

A new POLITICO/Morning Consult poll found that a ban on flavored electronic cigarettes is broadly popular among the whole electorate.

One reason for the contradictory signals from the White House in recent months: Trump is squeezed between the pro-flavor-ban forces — which include some public-health advocates and his wife, Melania, who is reportedly troubled by the rise in youth vaping and nicotine addiction — and his right-wing allies, who are generally opposed to a ban and are trying to convince him it could be electorally perilous. A constellation of conservative groups are making a small-government case against prohibition.Theres nothing new about interest groups using polls to try to persuade decision makers. But, typically, they are trying to demonstrate that their plans and proposals have widespread popular support.

Thats not the case with vaping, and even proponents of the products acknowledge the bans are broadly popular. In this case, its the intensity among e-cigarette users — some of whom credit the products with helping them quit more harmful tar cigarettes — that is intended to rattle the White House.

John McLaughlin, one of the pollsters who worked on Trumps 2016 campaign and is expected to reprise this role on the 2020 effort, conducted the internal survey on behalf of the Vapor Technology Association. The poll was conducted online “via an e-mail invitation distributed to over 121,000 adult vapor consumers” in the battleground states, the association said in its release. Of the respondents, 99 percent said they use the product every day or nearly every day.

McLaughlin pointed to the reliance and devotion to the product among super users to explain the sky-high opposition to an outright ban. “Its because youre taking away something they use every day,” he said. 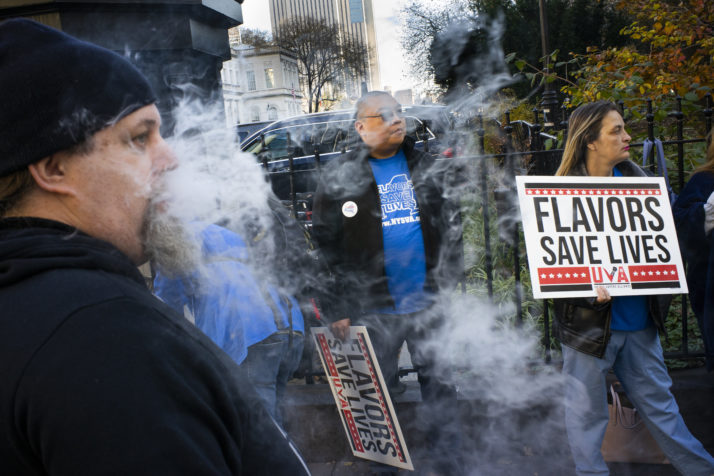 Cliff Zukin, a former president of the American Association for Public Opinion Research, said the polls sample was flawed and unrepresentative and criticized the question wording as “biased and leading.”

He said the evidence suggests regular vapers make up a smaller slice of the national population, perhaps 2 percent, though it may be higher in some states.

Zukin also said that the near-unanimous numbers in the results would backfire among savvy poll-readers, who know that its hard to get 90 percent of Americans to agree on anything.

“This is designed to advocate and to get politicians running for reelection shaking in their boots,” said Zukin. “Instead, its going to have them laughing their asses off.”

The latest POLITICO/Morning Consult poll demonstrates how out of line this small slice of the population is with the broader electorate on the issue. A 55 percent majority of voters support banning flavored e-cigarettes, the poll shows, while only 24 percent oppose a ban.

Trump is squeezed between the pro-flavor-ban forces and his right-wing allies, who are generally opposed to a ban and are trying to convince him it could be electorally perilous.

Tyler Sinclair, Morning Consults vice president, cited the recent spate of news stories about illnesses and deaths attributed to vaping for the overall public support for a flavor ban.

“As vaping-related illnesses spike, our polling suggests there is bipartisan consensus on banning the use of flavored e-cigarettes,” Sinclair said. “Notably, 63 percent of Democrats and 53 percent of Republicans would support a ban on flavored eRead More – Source

New hospital in Ulang for people affected by violence and neglect

Médecins Sans Frontières (MSF) is establishing a project in the town of Ulang, close..