ROME — It is 40 years since Italy passed a law that legalized abortion, but activists fear a womans right to choose is again under attack — this time from the countrys politicians.

Thousands of women have taken to the streets in recent weeks to protest against a rise in anti-abortion initiatives in Italian cities — but the same measures enjoy widespread backing among supporters of the countrys most powerful party, the far-right League, as well as the Catholic Church.

While the measures are so far confined to the local level, they are gaining momentum and the abortion law — known as “la 194” and dating from May 1978 — is in the crosshairs.

Under the law, a woman can have an abortion during the first trimester. After that, its only available for “therapeutic” reasons — if the health of the fetus or the mother is deemed to be seriously at risk.

However, according to the latest health ministry figures, over 70 percent of gynecologists refuse to carry out the procedure on moral or religious grounds, declaring themselves “conscientious objectors.” That percentage rises to as high as 90 percent in some regions, especially in the more conservative south.

The Leagues coalition partners, the 5Stars, do not share its views on abortion.

In October, Verona became the first Italian city to declare itself officially “pro-life.” City councillors approved a motion, put forward by the Leagues member of the council Alberto Zelger, which includes public funding for Catholic and anti-abortion associations, and the launch of a regional project to encourage pregnant women to give unplanned babies up for adoption.

Within weeks, similar motions were up for discussion in other councils, from smaller towns such as Ferrara and Sestri Levante to the two biggest cities in the country, Rome and Milan.

“I was surprised by the reaction to our initiative, both in positive and negative terms,” said Zelger. “We want to help women who struggle for economic reasons to carry their pregnancy to term, in a country that suffers a heavy demographic crisis. We defend the social value of giving birth.”

Zelgers position is backed by Lorenzo Fontana, a League member of parliament who serves as family minister — his ministry was created when the League came to power alongside the 5Star Movement — and who openly backs repealing la 194. Fontana has compared the law to legalized murder, and put at the top of his agenda reducing the number of abortions and greater freedom for doctors to try and dissuade women from seeking them. 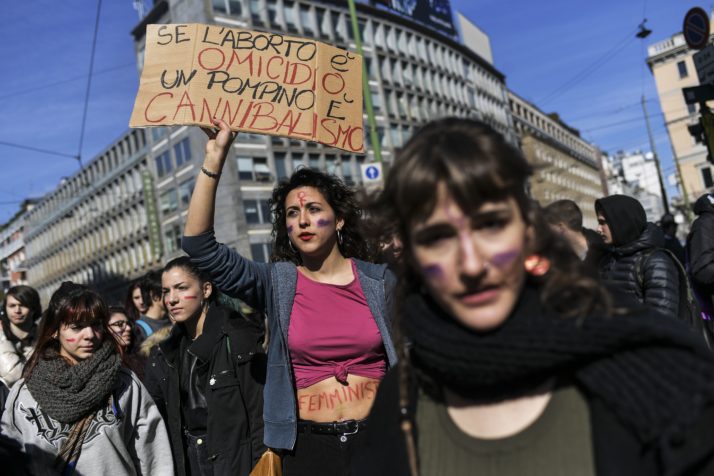 “I want to intervene to strengthen counseling services to dissuade women from having abortions. I am Catholic, I do not hide it,” Fontana, a former deputy mayor of Verona, said in June, shortly after his appointment.

The League has also floated a plan to encourage women to have more children by offering families free farmland if they have a third child.

The Leagues coalition partners, the 5Stars, do not share its views on abortion: Undersecretary of State Mattia Fantinati called Veronas move “medieval.”

Rise of the incubators

Feeling on both sides is strong. A group called Comitato No194 (Committee No194), which organized rallies in Milan and Caserta last month, wants to abolish la 194 and replace it with a new law that could lead to prison sentences for women who have a voluntary abortion and the doctors who perform them.

In Verona, activists from womens rights group Non Una di Meno (Not One Less) staged a protest during council debates on the new measures, dressing as characters from Margaret Atwoods “The Handmaids Tale,” in which women are relegated to the role of “incubators” to produce children.

“We risk turning back the clock dramatically and spreading the idea that women are valued not as individuals, but only as mothers,” said Laura Sebastio, one of the activists.

Sebastio said a decline in the official number of abortions, which have fallen sharply in Italy since 1982, proves that la 194 has not been used as a method of contraception, as its detractors claim.

However, she acknowledged that the law needs to be amended. “But that has to be done by strengthening counseling centers and sexual education in Italian schools, so that Italian women are fully aware when they make their choice,” Sebastio said.

Emma Bonino, a senator, former Cabinet minister and former European commissioner who was one of the main backers of la 194, said she isnt worried by the rise in anti-abortion campaigns. “These movements have always been there and they have the right to express their opinion. But we have always managed to beat them,” she said.

“What worries me is when institutions, at a central or local level, get involved. Also, we shouldnt underestimate this nostalgic conservatism that seems to be infecting our politicians. We cant let our guard down,” she said.

Bonino agrees with abortion rights activists on the need to fight back against organized conscientious objection. Because of the prominent role played by the Catholic Church in Italian hospitals and clinics, doctors who are prepared to perform abortions are often marginalized. According to the Council of Europe – which has slammed Italy twice in recent years over limited abortion access — doctors face “various types of direct and indirect labor disadvantages” if they perform abortions.

The lack of access to abortion services in some regions, especially for so-called therapeutic abortions after the first trimester, often forces women to travel to another city or region — or even abroad — to seek a termination, according to recent research.

“Womens rights and lives are put increasingly at risk for ideologic reasons,” said gynecologist Elisabetta Canitano, who has performed hundreds of abortions a year for decades.

“They are left alone, missing even basic information on how to access services,” Canitano said. “What is going to happen when our generation of non-objectors retires?”

Read this next: A Royal comeback for the French left