France is trying to make candies less shiny — against the EUs wishes.

Paris is worried that the whitening additive that makes sweets gleam — titanium dioxide, also called E171 — and that is used in a host of products from toothpaste to ice cream, chewing gum and cake frosting, is unsafe. But the European Food Safety Authority (EFSA) doesnt agree.

Rather than toe the EUs line, Paris imposed its own restrictions on E171 starting next year that are tougher than those that apply in the rest of the bloc. Thats prompted warnings that the regulatory divergence will undermine one of the foundations of the EU, the single market, by making it impossible to sell the same products in all countries.

The issue comes to a head this month, when EFSA is expected to complete its latest report into the safety of titanium dioxide.

European Commission spokesperson Anca Paduraru said that when those results become available, the Commission will “review the situation and consider the next steps, together with the member states in accordance with the applicable EU legislation.”

Its part of a broader trend, with Paris adopting more restrictive rules than the rest of the EU on products ranging from the weedkiller glyphosate to bisphenol A — a plastic softener essential in the production of many consumer goods.

France has long been much more activist on environmental issues than other EU countries. Its fervent movement opposed to genetically modified foods in recent years has broadened into a politically powerful effort to curtail chemicals — creating a force that President Emmanuel Macron cant ignore.

A Eurobarometer poll on chemical safety released in 2017 found that most EU citizens believe products to be broadly safe. In France, only 26 percent of respondents think that products containing chemicals are safe — the lowest in the EU.

That suspicion of regulations and governments is seen in other areas as well. France is Europes most vaccine-skeptic country, and has seen recent anti-government protests in the form of the Yellow Jacket movement.

French exceptionalism also comes through clearly when it comes to titanium dioxide. 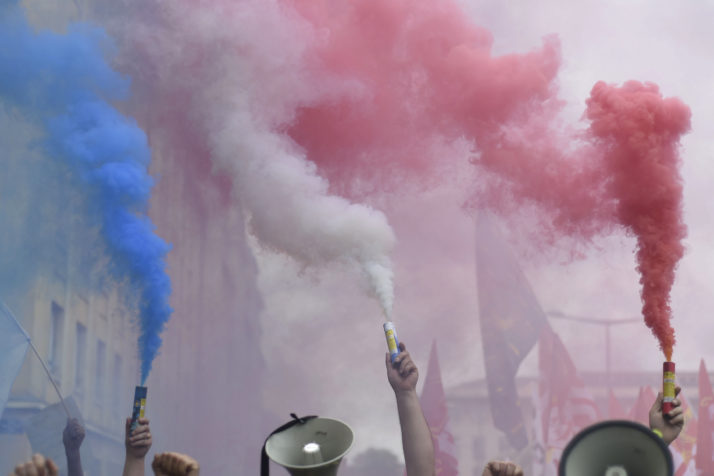 The substance has been under intense scrutiny for years. EFSA found in 2016 that normal exposure to the additive is unlikely to pose risks to people. It reaffirmed its conclusion last year based on a review of additional data.

But a 2017 study by Frances National Institute for Agricultural Research found that exposure in rats is linked to the development of pre-cancerous lesions. In light of these findings, the French government asked its national food safety agency ANSES to evaluate EFSAs assessment.

ANSES said it could not eliminate the possibility that the substance is harmful, due to significant data gaps, and recommended limiting exposure to the additive for “workers, consumers and the environment.”

On April 17, the French government adopted a decree to ban the whitening chemical “as a precaution” as of next year.

An EFSA spokesperson said the ANSES evaluation “does not identify any findings that would overrule the conclusions reached in EFSAs previous two scientific opinions in 2018 and 2016 on the safety of E171 as a food additive.”

The Commission has proposed classifying titanium dioxide as carcinogenic, albeit only in its powdered form.

But industry has protested strongly against the Commissions classification proposal, and so far Brussels hasnt managed to gain a majority among national chemicals experts, who have to approve the idea.

Brett Pinker from the Titanium Dioxide Manufacturers Association said his industry is worried about the impact of a French national ban.

“We are concerned that a ban or suspension of titanium dioxide in food will result in an important fragmentation and disruption of the European single market as EFSAs confirmation of the safety of E171 will continue to be applied by all other EU member states,” he said.

Efforts to unify the conflicting approaches by Paris and Brussels have so far failed.

A May meeting of national experts noted that 18 countries indicated “that the advice of EFSA on the safety of titanium dioxide as a food additive should serve as a reference.” The countries also highlighted the “importance of keeping harmonised rules for food additives” across the Union.

Manufacturers are already scrambling to comply with the looming French ban.

Mars Chocolat France, the maker of M&Ms, said it would invest $44 million in its French factory, which produces 150 million of the candies a day for all of Europe, to find “optimal alternatives” to removing titanium dioxide from its products by the end of this year.

“Consumers may notice slight color variations in some of our titanium dioxide free confectionery products,” said a company spokesperson, adding that the candies will still taste the same.

Other French sweet brands already stopped using the food colorant ahead of the restrictions on its use. Carambar said in February it had removed E171 from its Read More – Source